"DIVIS designs sustainable solutions
that do not only work in the short or
medium term."

Safety in a panoramic view

In the trans-o-flex transshipment hub in Hamm, the ParcelVIS video solution ensures that shipment disruptions are resolved quickly. The search times could thus be reduced by 95 percent.

"Excellent" in the true sense of the word: The logistics service provider trans-o-flex, which specialises in high-quality and sensitive goods, has already been awarded several times for quality, price-performance ratio and customer service. Reason enough for CEO Wolfgang P. Albeck to further improve the image of his company. “Our success depends on the high quality of our service. In addition to speed, flexibility and reliability, this also includes the integrity of the goods entrusted to us."

Against this background, trans-o-flex 2020 invested in a video management system from DIVIS at the new logistics centre in Hamm. Among other things, sustainability spoke in favor of the chosen supplier: “DIVIS designs sustainable solutions that do not only work in the short or medium term. The continuous improvement process over the entire contract period is ensured”, emphasises Albeck. In addition, DIVIS offers "individual solutions for every logistical requirement that far exceed the functional scope of a classic video surveillance system".

In addition to parcels, trans-o-flex also transports pallets that are handled together in the warehouse in Hamm. In order to be able to visually follow both types of consignments with a single video solution, DIVIS expanded the ParcelVIS system developed for parcels to include functions of the CargoVIS solution designed for palletised shipments.

"We wanted to be able to track all shipments fully automatically and at the parcel level, so we were looking for a complete solution compatible with the TAPA FSR C security standard."

One of the special challenges of the project was a very tight schedule. To make matters worse, some upstream suppliers had to struggle with scheduling problems due to the corona pandemic. Last but not least, the strictest hygiene rules had to be adhered to throughout the project, especially since trans-o-flex is considered to be a system-relevant company.

The site in Hamm, which was built on a 33,000 square meter site, was opened on time in May 2020 and established new standards for the company. This also applies to resolving shipment disruptions as quickly as possible, which can occasionally occur among the roughly 40,000 parcels and around 900 pallets handled in the pick-up and delivery area every day.

The sorting system automatically steers the parcels from six entry points to one of 119 loading points for trucks or vans. In between, the parcels are automatically scanned, measured and weighed. Since the sorting belts are guided more than four meters above the hall floor, the forklifts loaded with pallets can drive underneath. "We wanted to be able to track all shipments fully automatically and at the parcel level, so we were looking for a complete solution compatible with the TAPA FSR C security standard," explains Albeck. In order to achieve this goal, only 134 cameras had to be distributed over the extensive site, 98 of which are inside.

In addition to conventional optics, panorama cameras, on which the 360° concept developed by DIVIS is based, were also installed. The panorama cameras enable a comprehensive 360° view and thus the large-area tracking of parcels, while the blind spot below the camera, which is common with standard cameras, is eliminated. A panorama camera covers very extensive areas and can replace up to 4 conventional cameras, which also minimises the cost of wiring and energy.

Recordings are made at a frame rate of at least 8 frames per second (fps), which are stored on two recorders with a capacity of 96 terabytes each. Thanks to the 4K resolution, even the smallest details can be zoomed in in high quality. By entering the parcel number, ParcelVIS finds every parcel within seconds and can display its route through the sorting system. "All loading and unloading as well as the sorting processes are now perfectly documented and traceable at all times," Albeck sums up.

ParcelVIS creates virtual cameras that always show exactly the relevant image area, making the laborious combing through the detailed, round 360° view unnecessary. Even axis jumps are converted by the system, which greatly facilitates operation. Correspondingly, the training effort was low, and trans-o-flex only needed a few hours.

For the daily research of the few irregularities, the employees at trans-o-flex only need between 5 to 10 minutes. "Compared to our other locations without automated parcel tracking, this means a time saving of over 95 percent," says Albeck, who, together with the works council, has set up a committee of five people to operate ParcelVIS.

The works council was informed of every step during the project phase. “In a kick-off meeting, it was explained by means of practical examples that this is a video management system and not video surveillance,” Albeck notes. Everyone involved "recognised immediately that ParcelVIS increases our productivity enormously and avoids unnecessary search effort". No wonder that the solution is highly accepted among employees.

If questions or technical problems arise in daily practice, the employees contact the DIVIS customer service. "The user support is professional and excellent," confirms Albeck, for whom the service quality was another criterion when selecting the supplier. This service is supplemented by the daily monitoring of hardware and software using the AMVIS maintenance tool, also developed by DIVIS.

Trans-o-flex also looks back with satisfaction at the cooperation during the project phase: “We had high demands on a complete solution, all of which were met in the cooperation with DIVIS. We experienced efficient project management and innovative solutions,” recalls Albeck. Even before the first camera was installed, “the requirements were discussed in detail, detailed analyses made and simulations carried out in real time”.

Six months after commissioning, trans-o-flex is still very satisfied with the solution.
"Our expectations were fully met and the system has run 100 percent stable since installation."

More about the DIVIS solutions

The Transported Asset Protection Association – TAPA for short – is an association of security experts and business partners in the high-tech sector who are dedicated to the security threats in the supply chain of high-value goods. It brings together global manufacturers, logistics service providers, freight forwarders, law enforcement agencies and other interest groups with the common goal of reducing and preventing losses along international supply chains.

TAPA FSR specifies minimum acceptable standards for the storage of goods in transit and in the warehouse. Companies can be certified according to TAPA FSR in classes A, B, or C, with A being the highest level.

The core competence of trans-o-flex are logistics solutions for the pharmaceutical, cosmetic, consumer electronics and other high-quality, sensitive goods industries. The company has set up transport networks that actively keep goods at 15 to 25 degrees Celsius or 2 to 8 degrees Celsius, which are documented in accordance with the EU rules for pharmaceutical transport. These EU GDP require the highest standards for safety, cleanliness, reliability and transparency, from which all trans-o-flex customers benefit. trans-o-flex works internationally via the EUROTEMP (temperature-controlled logistics) and EURODIS networks (in 36 European countries). In contrast to pure parcel services or forwarding agencies, trans-o-flex delivers goods in parcels as well as on pallets. trans-o-flex Express also offers numerous express and time slot deliveries, special services such as dangerous goods transport (without minimum quantity regulation), consignment consolidation or direct trips. The express transports are supplemented by storage, order picking and individual value-added services such as sterilisation of pharmaceuticals. The company thus covers the entire logistics chain from procurement to fulfillment. The annual turnover of the trans-o-flex companies, which employ a total of around 2,200 people, amounted to around 495 million euros in 2019. 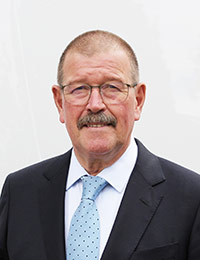